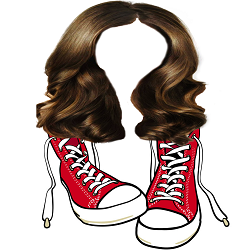 I have noticed something odd. Some of you are probably saying, “Mr. Ohh!, you notice odd stuff all the time. Why are you telling us about it now?” Ya’ know that is a valid point. I guess this was just odder to me than even the normal odd standard I live with. You see, I had to drop my son at college and was going to have to pick him up later. Therefore, I decided to just hang around for the two hours and wait. I sat in a lounge area and tried to read my book. I was constantly being interrupted. Over and over and over again, some student just had to tell me they liked my shoes.

I do admit I have unique taste in footwear, but after about the sixth comment I was beginning to feel a bit self-conscious. I pulled my feet closer into my chair, adjusted for comfort, and kept reading. The comments continued even though my shoes were half hidden. They must have been actively looking for my feet, just to check out my footwear. What is up with that? Why are college age students obsessed with my old feet? My days of higher education are long behind me but I am pretty sure I never spent my days on campus looking at other’s feet. Not that I was an over attentive student mind you. I was just more concerned with other parts of their anatomy. You know, their faces. That’s my story and I’m sticking to it.

Anyway, about that time I realized it wasn’t just the students. I mean in the news you hear all the time about celebrities having hundreds of pairs of shoes. Going by the numbers, it they wore three different pairs a day, it would take half a year to wear them all. By that time, they would have bought even more shoes and the death spiral into oblivion would continue. In fact, I can remember several comedians referring to folks getting depressed and going out to buy shoes. Also eating ice-cream but this point doesn’t advance the topic, so forget I mentioned it.

What is this fixation so many people have with shoes? I own exactly three pair. Boots for walking the woods and gardening, Black loafers for dress-up, and a pair of Converse High Tops for the rest of the time. If I wore three different pairs a day, it would take a miracle. I just wouldn’t do it.

What’s worse is there seems to be some sort of competition for folks to look at everybody’s shoes to make sure theirs are the best. Where do they have the sign-up form for this contest? And what might the prize be? I want to register. With all the comments I got in that one day, I think I could win. I know I’d at least make the finals.

All this being said, it started me wondering why my daughter spends an hour every morning doing her hair. Is it my responsibility, as her father, to tell her to stop? How would she react to the fact no one looks at her hair? They’re only looking at her shoes. No, I think this is more of a wife job. It’s not that we don’t share duties. I just think this it more of a girl thing. Besides if my daughter takes the news badly, they can always go out and buy shoes.

Come to think of it, it’s not just my daughter. Back when the current president was a TV star there were many magazine articles about his hair, and whether or not it was removable. One president even got impeached because he stopped traffic at an airport to get his hair cut. My sons are the same way. They obsess over hair. But they seem to have given up on the whole shoe thing. Their shoes are crap, but just suggest a haircut and they act like they’ve been sent to some sort of dungeon. It boggles my mind. I mean haircuts don’t hurt. But my boys treat them like torture. Can’t you just imagine the Sheriff of Nottingham after he captured Robin Hood?

Talk Robin or it’s the rack.

All right thumbscrews will loosen your tongue

Ho Hum is that all you’ve got

Perhaps a bit of solitude in the iron maiden

I know (he says while rubbing his hands together) Guards fetch me the scissors, I’m going to cut his hair

Maid Marion is my spy in the castle. Little John has all the gold at North Crossing. Use GPS to find it. Alan A-Dale is currently giving to the poor at… And so on. If I’m correct on all this, he’d probably end his confession by telling the sheriff how much he liked his shoes. But I digress.

It took me four months of begging to get my sons to get a haircut. It happened on a Friday and I endured two full days of constant whining. Finally, Monday arrived and they went back to school. I heard absolutely nothing about the cuts for several days. I wondered about this and found out that a few girls told my boys they liked their hair. The complaining immediately ceased. Nope, young men have not changed a bit since I was in school.

I guess my point has been proven, sort of. These days girls, and boys probably, notice hair almost exclusively. Also, as my day at college points out, most people notice shoes. Now, I’m no sociological expert, but what about all the stuff in the middle? I’m pretty sure there’s a whole person in between those two extremes. It presents an issue which I just thought of. What about bald guys? I mean, if folks only notice shoes and hair, and a barefoot bald guy walks up to them, is he completely invisible? This could be a serious problem. What if a barefoot, bald thief walked into a bank? Would anyone actually notice him? I’m sure the security officer at the door would be trained to notice his arms and legs and stuff. But what if the thief got past the guard? Once inside he could make off with millions.

I might have just solved the whole shoplifting epidemic at Walmart. The greeters can’t be as well trained as bank guards. If there was a legion of barefoot bald bandits, they could be making off with whole carts of stuff and no one would notice. Am I the only one who sees this as a problem? Then again maybe that’s why you see signs on entrances to establishments everywhere: NO Shirt, NO Shoes, NO Service. It must be to stop this very problem. The civil rights folks must have told them they couldn’t discriminate against hair. Who knew?

Anyway, it is for these reasons I am announcing the #I Have A Body movement. I will make thousands of purple skin-tight t-shirts with this written in a large font. These will make folks notice the chests of others and not their hair and shoes.

3 thoughts on “From Top To Bottom And Nothing In Between”