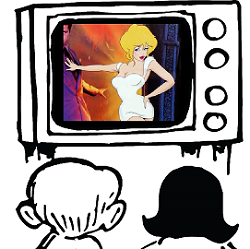 I don’t watch a lot of TV. But every once and a while there’s a show I’m interested in, so I get all comfortable, throw an afghan over me, (the blanket, not the dog or middle-easterner) put up my feet and veg-out. The problem is that the TV stations have the gall to put extremely bad shows on right after the one I want to see. I end up so snuggled in and the remote is all the way over by the table, so I end up watching these shows. I’m sure there is a marketing reason for this, but for me it’s flat-out cruel and unusual punishment.

This summer was a prime example. Right after my favorite show, they put on a reboot of a terrible show from the 1990’s. Not with new actors, no. that might have been slightly acceptable. They took the same actors, now in their late forties, and brought them together to act like they were going to reboot the old show. Don’t understand? Well neither did I.  Unfortunately, it was so much like a train wreck I just couldn’t look away.

First, they had the old star. She was talking to a producer about the reboot and was assigned the task of getting all the people back together. The hurtful thing was, she no longer looked cute and twenty. She looked like a badly molded Barbie doll. It wasn’t just that she had work done, she looked like all the original parts had been replaced with after-market forgeries. I mean this chick was one boob-job away from being non-recyclable. The Chinese wouldn’t reclaim the plastic in this girl. If she was buried, she wouldn’t decompose, she would have a half-life. I may have gone a bit too far with all of this, but if she would have invested the money instead of paying for reconstructive surgery, she’d never have to work another day in her life. But maybe I should move on.

As the story moved forward, we meet some of the other major actors. All are in good stable relationships until Death Barbie shows to offer them a job. Then one by one all their lives go straight down the toilet. In one instance a woman married twenty-five years sees the plastic-grim-reaper and decides she’s not happy. I don’t get it. If I were being offered a high-paying job in television, I’d be thrilled. I’d take my wife, go out on the town, get blasted, and maybe buy a bunch of things I don’t need. Not this chick. She hears the good news and reverts right into soap-opera mode. As her husband is pouring Champaign, she announces she’s upset and begins to wonder if maybe she doesn’t like boys anymore. If that’s not strange I don’t know what is. All the women I know get upset and go buy shoes or ice cream. Not one of them has ever heard great news and then questioned their sexuality. But then again, I don’t live in southern California. Things are different there.

Another couple has the perfect marriage. Both are successful, happy, strong, and very good looking. Then Plasti-girl shows up. The continue to be happy for exactly ten more minutes. A young man comes to the door and announces that the man is his father. This is a very touching moment and the man turns immediately into a child throwing a temper tantrum and totally disbelieves everything. As the series progresses, he becomes depressed, grows to accept the son, then takes a paternity test, finds out he’s not the father and gets depressed all over again. His wife is a rock of support. All the way through this fragile man’s two depressions and eventual recovery, then demands a divorce. I’m not thinking she’s up for mom of the year. All this horror happens in nine episodes. Boy things happen fast in television land.

The series comes to a head when one of the aging actors can’t be found, and for some unknown reason the show is impossible without her. Death Barbie is sent to find her. We find out the missing actress has dropped off the grid, gone back to nature, and joined a monastery in the Andes mountains, so she could smoke weed and find herself. Why she didn’t just go to Colorado, where all this is legal, I can’t figure out, but there it is.

Well, Barbie goes on a quest to find her, wearing three-hundred-dollar pumps and a white sundress. Eventually, we see her on a broken-down bus surrounded by Spanish-speaking chickens and a piglet or two. The driver pulls over, drops her off at the base of a mountain, and rolls his eyes as she takes her designer rolling luggage off the bus and treks up the hill. Of course, she is correctly outfitted for this expedition. I mean, she is wearing sunglasses, a bandana around her forehead, and is carrying a matching Louie Viton bag. The pumps give her absolutely no trouble and by the end of the commercial, she has made it to the top of the mountain.

Once there, Barbie finds herself encircled by old wrinkly men, who look at her questioningly, and don’t understand a word she says. The moment grows tense. Then as despair sets in, the object of her search comes out of an unseen hut. Wow, I never saw that one coming. This is Hollywood at its best. In the blink of an eye, everyone is back in the studio, smiling and greeting their long-lost friend. Now, I don’t know how the girl was able to do this in pumps and a sundress. I guess travel is so much faster on TV.

You might well ask: Why was it so important to spend thousands and get that girl out of the mountains? They wanted to recreate an iconic picture. I guess Photoshop doesn’t exist in that part of the country.

Anyway, after nine weeks the entire cast’s lives are in shambles, everyone is crying, and Barbie has on too much lipstick. But the high point is when everyone is finally on the set and ready to move the project forward. Sadly, three of the girls all wore a red dress, so there is one last devastating conflict to overcome. Once done the producer comes out and makes the terrible announcement. One of them will be fired due to budget cuts. They made this darn thing a cliffhanger. As if the first try wasn’t boring and stupid enough, the powers that be want us to be sitting on the edge of our seats wondering who will go home.

Personally, after all that happened, I think they all should all raise their right hands, yell “Pick Me,” in unison, and all walk out. Leaving Barbie to stare at the camera, reminding us all of the dangers of cosmetic surgery. But that’s just my opinion.

One thought on “I Guess Even Old Actors Need A Paycheck”