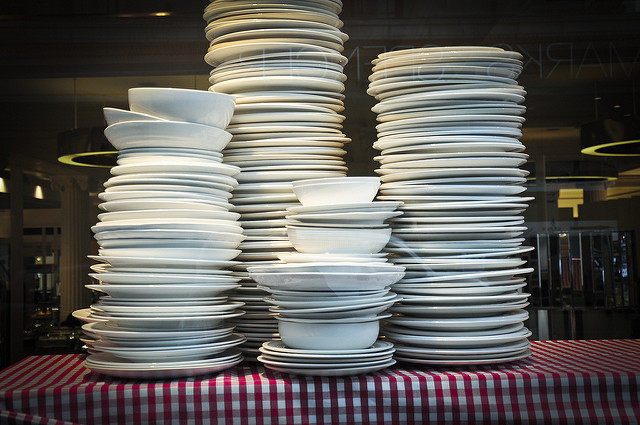 I have done it! I may not be the first person to ever have done it, but it wouldn’t surprise me if I was. I have reached the pinnacle of good housekeeping. I expect any minute now, some magazine or news outlet will be breaking down my door to find out how it was done. Of course, there will be scoffers. Those who truly don’t believe it can be done, but I say nay to those doubting Thomas’s. For it can be and was done. Yes, every dish, utensil, and cooking pot in my home is currently clean and put away (massive cheering sounds). Oh, I know this has probably been done many times by women. But in this case, this daunting task was completed by a male of the species (more cheering).

Let me tell you how it all began. Today, after my children went to school, I decided to help my wife and clean up the breakfast dishes. Suddenly the memory of the clean dishes in the dishwasher haunted me. I rose up to the task and put away not one, not two, but all of those sparkling pieces. I even stacked them all, in the correct cabinet, from largest to smallest. Then I remembered the two glasses, and one small plate that was sitting on my desk. After another few moments, I was distracted and happened to pass my son’s room. The male gene is alive and well in him as well. It took two trips to collect the dishes, but I considered it a personal quest, a lifelong ambition, my own personal miracle to, once and for all time, achieve the status that I now hold.

I I began a painstaking search of the entire house, leaving no couch cushion unturned. I moved furniture, much of it my doctor has cautioned me against moving. But I could not be stopped. I did everything necessary to fulfill my destiny. I even found a fork in the bottom of a toybox the kids used as babies. Of course, the family room is now covered with old unused toys, but that is a mission for another day.

Every item was returned to the kitchen. The dishwasher begged to be loaded and then forgotten. But was this good enough? Nay, I say. Perish the thought! It was my moral duty, on this day, to place into the cupboard and drawer every piece of food service equipment that I own. I retrieved the liquid soap from underneath the kitchen sink and proceeded to do all the remaining dishes by hand. I even washed the funky plate that spins in the microwave. Agreed I did not wipe out the microwave, the important thing was the dish.

My wife, God bless her soul, knows far better how to implement the strange task of washing dishes by hand. But after two or three false starts, I managed to learn this elite skill. I felt like John Smith wandering for the first time on the shores of what soon would become Virginia. In fact, it reminded me of coastal Virginia due to the amount of water on the floor. This aside I had proudly entered a new and surprising world upon which husbands rarely tread. I could not know what fortunes would befall me, but my sense of discovery would not let me back down. I made the soapy water and was actually able to find that little brush which reaches the bottom of the glasses. Yes, the tools were strange to me, but I have used brushes before when cooking outside, a very manly thing to do, so I understood the basic principles.

After several hours, the dishes were in the rack and the kitchen was covered in water. The mop was another new and amazing thing that I had never tried before, but I soon found out how to use it in an efficient manner and only slipped and fell on my butt twice. Then to the toweling. At first, I thought that dish towels were an amazing device for removing soap from various articles, and for blowing one’s nose when coming inside in a wintry day. Sadly though, said dishes had a funny feeling to them. I remembered a long-lost word from my childhood. The word was rinse. Something from an age-long past told me that I had made a mistake. Then it came to me like the flood of a spring river. Washed dishes must be rinsed before they are drained, dried, and put away. Wow, what a concept.

Because I was completing a quest, I decided it was worth it, this time, to follow those aincient rules. So, I took what items I had completed, rubbed them again with the soapy water and brush, rinsed them thoroughly, allowed them to drain in the rack, then dried them with (check this out) an actual clean towel. I am so proud of myself. I did have to mop the floor again, but that did not stem the pride in a job well done.

I repeated this process for every item which I had brought to the kitchen. Then, as the required time had passed, even the dishwasher was finished, so I unloaded it and put everything in the proper cupboard. I stood and surveyed my realm. There was not a dish or utensil that was not where it belonged. I wanted to congratulate myself with a cup of tea. It was not to be. For I quickly realized to have a cup of tea meant I would have to dirty a cup. Woe is me, but I suffered through it, knowing my wife would be surprised when she came home.

I admit I was surprised by her reaction when she came into the house. Her eyes were wide with surprise. I had first assumed that it was because of the great achievements I had made. But soon, I found out she was more than a little dismayed at the mess I had made of everything else. It seems that, while great, my accomplishment was lessened by the fact that I had destroyed the cleanliness of the rest of the house. The toys all over the rec room, the cushions from the furniture on the floor, the disarray of the bedrooms, and the general wetness from spilled water all over the house. I really don’t understand women. But I guess, no man does.

Hey everyone. Thanks for reading Mr. Ohhs! Sideways view. I hope you’re having as much fun as I am. If you like it, I bet a friend of yours will like it too. Share it on Facebook or send them this link sidewaysviewblog.wordpress.com They’ll love you for it and might even return all the stuff they borrowed. Hey It Could Happen! (if you don’t have any friends, I’ll step up for the low low price of just $5/week)

If you have comments, want to discuss whether Dawn or Palmolive gives a man softer hands, or have me take a sideways view at your favorite topic. Send me an E-Mail at ohhssidewaysview@gmail.com I’d love to hear from you