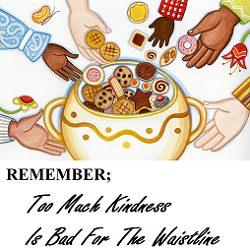 Well, Ho-Ho-Ho, and raise your glass of eggnog. Christmas has passed. The winter blues will set in soon, and life will get back to whatever amount of chaos you call “Normal”. Sure, some of you have a few holiday get-togethers to finish up, and of course there’s the annual drunken binge/ hangover festival we have every year to celebrate purchasing a new calendar.

Why do we do that? What makes January a reason to drink bourbon and champagne, violently vomit, and have a headache for three days? Where’s the appeal? What’s worse is the young people we’ve been feeding Shirley-Temples to for eighteen years, scream “I’m gonna get me some of that.” They actually look forward to worshiping the toilet. If you want the new-year with all its promise to be better than the last, maybe you shouldn’t start it painfully dehydrated, in a jail cell, accused of urinating on public property. Maybe I’m nuts, but I just don’t see the allure. Sorry I was gone, I’m back now.

Where I’m going with all this pondering and wandering, is the simple fact that the holidays are ending. (Insert the sad emoji, or emoticon of your choice) All we are left with is, a dried-out pine tree, some good memories, several trash-bags full of used wrapping paper, a sizable pile of credit-card bills, and mountains and mountains of uneaten holiday cookies. And, not just regular cookies, like chocolate-chip and sugar-butter, either. Weird flavored cookies. There’s vanilla-anise, cranberry-mint, peppermint-walnut, and the ever-popular brown sugar-oatmeal-peanut butter-M&M-chocolate chip-maple-raisin-and whatever-happens-to-be-on-the-shelf-on-baking-day Monster cookies, my sister likes to bake.

Then there are the weird cookie projects people bake and call traditional, like the Kransekake. What’s that you ask in anxious surprise, wondering if you are baker enough to create a thing with such a beautiful name? Don’t even think about it. It takes hours to bake and immense skill to get right. A Krasse-what-sis is a group of different sized almond-flour cookie rings. Each is rolled in ground pistachios to turn them green. Then they are baked and stacked to form a Christmas tree. Apparently, baking this is a Norwegian tradition. I think the lack of sunlight up there is starting to affect their brains.

You see, it’s one thing to bake yourself a few cookies when you’re in the mood for a dozen snickerdoodles. I’ve done this myself. Also, it’s good to have a few treats around the house when friends, (and their significant others who you don’t like very much) stop by. Nothing wrong with it. Of course, you need some homemade goodies when Santa stops in, or you end up with a lump of coal in your stocking. I get it. The thing is, it doesn’t stop there. In my family, the ladies set up baking weekends for the sole purpose of pumping out Christmas cookies. At those times, Keebler and Nabisco have nothing on my niece. Who can produce several dozens of thirty different recipes in two ovens without breaking a sweat. And that’s before she ties on her apron. Once the apron goes on, all bets are off.

Now, if my niece were the only person doing this, I would call her obsessive-compulsive, contact her analyst, and get on with life. But no. Three quarters of the people I know personally do this to some degree. Then I read about others baking like fools around the holidays, as well. Men, women, children, and many household pets seem to believe that the last month of the year is a reason to fulfill your secret desire to open a bakery. Then, as the holiday approaches, they suddenly realize they’ve made too many and they give the little goodies away. My own daughter has this malady. This is a real problem.

Everybody thinks they can get rid of the excess by giving it away. However, if everybody does it, everybody end up with the same number of cookies they started with. Everyone, that is except my uncle Dave. Uncle Dave is single and doesn’t bake. As a result, the whole family descends upon him with plate after plate of baked goodness. Again, if it were one or two people, he would smile and think what a wonderful surprise. But No! The masses drop in with so much, he has to have the annual cookie party. Here we all get together to visit, eat cookies, and become bloated with a sugar rush. Isn’t tradition wonderful?

Or maybe it’s not just tradition. Maybe it’s a conspiracy that had meaning years ago but now has gone terribly out of control. I figure some skinny peasants in England a long time ago were trying to get control of more land. They made a bunch of cookies and passed them out to their neighbors. Eating all the sweets, the neighbors grew lethargic, and the cookie-baking marauder could then take over the neighbor’s land. Far easier than pillaging, with far less crop burning.

Eventually others caught on to the idea, and soon all the peasants were sending cookies to each other. The unwary would greedily eat all cookies, truly thinking them an honest gift. After several dozen, the victim would get flabby, turn bluish, and their eyes would bug out. After this happened the usurpers knew they could move in for the kill. Hence the name Cookie-Monster. Perhaps you’ve even seen one of these poor unfortunates. They tend to live in run-down sections of New York. But I digress.

Of course, now the real reason for all the cookies has been lost by time, But the tradition is still going strong. As I mentioned, my own daughter has fallen prey to this in a horrible way. She has found and purchased a dastardly evil device called a cookie press. (Dun Dun Daaaaaaa) Now, before you start thinking it’s an ironing board for pressing the wrinkles out of cookies, you’re wrong. (Although it’s not a completely bad idea.) No, this is a canister-like device which she fills with dough and then shoots out millions of identical treats in no time. She has moved from dozens a day to billions. My house is filled with pink flower-shaped treats. They are tasty but I can’t seem to give them away. All my friends and neighbors have the same problem.

And it’s only going to get worse. In another month it’s Girl Scout cookie season again. Maybe I should call the president. He could build a couple miles of his wall with the Eggnog Spiritz from my house alone. Does anyone have his number?