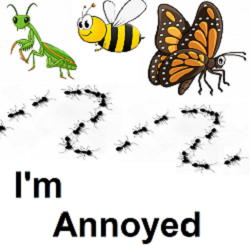 The other day, I was watching an educational television show all about insects. The thing is, it made no sense. For one thing, it talked about coloration and mentioned Monarch butterflies. Apparently, monarch butterflies are poisonous so birds don’t eat them. That made sense. Don’t eat poisonous bugs is good advice in anyone’s book, even a bird book.

Then they talked about the Viceroy butterfly, and said that a viceroy is a tasty treat so it colors itself like the monarch so birds don’t eat it. Is there a salon for this? Do all the little butterflies crack open their cocoon, hop in a car with their best girls, and head over for a mani-pedi? I can’t see that happening. Heck, if butterflies are anything like my daughter, they won’t want to copy of any stinking monarch. Can’t you just hear that conversation about a million times a day, “I’m thinking I want pink today or maybe some neon green.”

The salon bug would just sigh, and repeat for the fiftieth time, “Look hon, I’m here to make you look like a monarch so a bird don’t eat you, that’s all I do. No special orders.” Of course, it could be like an army thing where everyone gets the same haircut when they enlist, so I could be wrong.

To my thinking this should be all for naught. I mean who cares what color the butterfly is, it it kills you. Think about this; a bird flies by, and spots a monarch butterfly. He eats it, and dies. If no other bird saw this, all the other birds are going to make the same mistake. Now, we’re not just talking about a salon here, there has to be a bird bootcamp as well. “All right you chicks,” the Sargent would say. “Today we’re going to cover poisonous butterflies, so listen up!” About that time, he’d notice the space in the line. “Where’s Barney?” He’d call out.

One of the recruits would flap and answer, “Sargent, sir, when I last saw him he was chasing down an orange and black butterfly. I think he ate it, Sir.”

“Darn! That Barney never was a bright one. Well, let this be a lesson to you, and I’m going to insist to that stupid lieutenant that this information needs to be put out earlier. All that beaky idiot cares about are wing mites. Well wing mites may itch but they never killed anyone. But for now, let’s have a moment of silence for our fallen comrade, Barney.”

The program went on further to talk about camouflage in insects. There are bugs that look like sticks, flowers, and leaves. Again, with the salon? I don’t know. With all the variations of bugs, I’m more inclined to think of failed genetic experiments. I’ve said it before, and here is more indisputable proof, the dinosaurs were conducting DNA tests to increase the size of T-Rex’s arms. I think some of that bad DNA got into the water supply, and poof. Mutant green humped-back insects that look like leaves. I’m sure there must have been a class-action lawsuit brought forward, but since these things take so long, the comet likely happened before the settlement.

Another inconsistency I found was with the mantis species. There are some twenty-four-hundred species of mantis of various sizes colors and shapes. Now a trait of mantis is that they hold their front limbs in a certain way. They all do this yet a few of them are called Praying mantises. The narrator told us; this was because of how they hold their arms as if in prayer. Again, they all do this, so what is different about the ones called Praying? Did they establish a church, and go there once a week? Mantises are supposed to be solitary creatures. I just don’t see them getting together for services, and coffee fellowship. Also, after a mantis wedding the wife eats the husband. Not a congregation I’d like to belong to.

I don’t think they’re praying at all. I think they just established the church on paper to take advantage of the tax breaks. What I can’t figure out is, why they would need tax breaks. I mean they eat flies, and hang out in trees. I’m not seeing a lot of opportunity for large amounts of income here. Of course, they could be working for the mob. I can see a scenario where the mob makes a deal with a male mantis who does some money laundering for about a year. Then to be safe they get the guy married and his new wife bites his head off. No witnesses. That has to be it.

Other bugs I don’t understand are the soldier ants. These little guys are voracious eaters.  Thousands of them go on rampages for whole years just eating everything in sight. It’s said they can strip a cow to the bones in about an hour. At times they slow down and have babies then keep going. They’re smart too, using leaves as boats to cross rivers and sometimes cutting down trees to cross small gullies.

Then all of a sudden, they just stop. No one knows why. They just break up into smaller groups and dig nests into the ground, all nice and peaceful. What happens to make them quit like that? The etymologists and other insect experts are stumped. Well, I don’t claim to know everything but those bug people are looking at this the wrong way. They’re examining things like instinct, pheromones, and the natural world, and never even think about the abilities of a good real estate agent.

Think about it. You and your buddy ants have eaten up the whole neighborhood and the buds won’t come out until spring. You all get mad. You walk down the road to find something to eat. But there are already some ants eating up that ground. So, the bunch of you start walking. Soon there are thousands of you all munching and looking for a new home. Eventually you come across an agent who knows her stuff. I’ve seen a good agent at work. This lady could sell tuxedos to penguins. She showed us a house that had a flooded basement and called it an indoor pool. I passed but that listing sold two days later. With that kind of power how much trouble do you think it would be to sell some nice patch of ground to a bunch of ants with sore feet.

Finally, the program ended with the typical “Save The World” speech. This time it was protect the bees. The show talked about this for twenty minutes and all it really said was that bees are important pollinators. Are they nuts? B’s are letters. I used several of them in this very post. Why do they need more protection than say S’s? I not sure why, but the campaign has been going on a very long time. Even Shakespeare asked about which letter he should use in his writing, remember, “To B or not to B?”

What I don’t understand is why I watch these silly programs. That Is The Question!

14 thoughts on “These Are The Things That Bug Me”