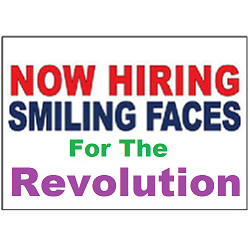 I heard that unemployment claims are at an all-time high. If you’re a person, like me, who ignores the news, let me explain. This is bad. Not, being attacked by a dragon, during a zombie apocalypse, while watching your football team lose, Bad.  More like your favorite politician got caught in a sex-scandal Bad. Unless of course you were the one they had the affair with, then the scandal might be worse, although if they’re good in bed and… Well, maybe I should continue and let you determine how bad it is.

The bottom line is people are losing their jobs, and jobs are important. How are you supposed get all the stupid stuff you need to make life worthwhile without one? When you have no job, you have to buy practical stuff like food and clothing, but when you have a job you can get tacky stuff like an electronic neon dinosaur wearing a T-shirt that says, “Elvis Lives!” And I happen to know there’s one on eBay right now. My wife is desperately trying to sell mine.

The funny thing is, as unemployment goes through the roof I look around and see so many places that are hiring. Now these are not all the best jobs. Most of them are probably a little demeaning. I mean I saw one sign at a restaurant that had, “Now Hiring,” on the top line of their sign, and “Hotcakes $1.99” on the second line. So, they’re hiring Hotcakes for one-ninety-nine. I don’t know what training you need to be a hotcake, and frankly I don’t know if the listed wage is for a day or hour. All I’m trying to say is the jobs are out there if you’re a little creative.

It is for these reasons and the fact that I’m bored and didn’t have anything else to do, that I present to all of you the Mr. Ohh! Career Seminar. You’ll have to imagine the trumpet fanfare and other orchestration in the back ground. I wanted to help as many folks as I could so I put this together on the fly.

The first thing I have observed is the need to smile. I see signs all over town saying places are hiring smiling faces. Now here is the great enigma. I then go into those very same places and no one is smiling. They are all frowning and rude. I therefore must conclude one of two things. Either the place is a front and they are hiring smiling people and then sending them to exotic places like the Bahamas. When I went there everyone was smiling. They were also eating a lot of conch, which is a fancy word for sea snail, Yeeeck. You can see that you have to take the good with the bad. But on the plus side if you’ve ever wanted to spend the rest of your life on a tropical island maybe you should look into this.

There is perhaps another explanation. If all their current employees, are frowning they need smiling people. The purge will start soon. You could be on the forefront of a new wave of hires that changes the entire attitude of the place. The quicker you get there and apply the more likely you’ll be on the cutting edge and be able to demand the big bucks. Think about it All you need to do is smile and you could be either be moved to the Bahamas or starting a revolution. So, forget all that resume’ and experience crap and learn to smile. Your future depends on it.

But you say, “Mr. Ohh!, I can’t smile. I’ve tried and my lips just won’t curl up. What am I to do? Don’t worry. There are solutions to everything. The second lesson is to be awesome. This is a little harder than smiling because there is no accurate definition of being awesome. The best way to be awesome is to surf on a huge wave. Then all the other surfers say how awesome you are. The thing is, we don’t all have an ocean. No Surfers. So, the challenge is to BE awesome without actually doing something awesome.

Thankfully there are books written on the subject, and all of their millions of pages boil down to this; To be awesome You MUST think you’re awesome. HUH? I don’t get it either. But you can’t fight it when it’s in a book so do this: Go to the top of a tall building and scream, “I AM AWESOME!” if no one disputes it, then you are. Go to that interview and tell that person just how awesome you are. Like this.

Have you had any experience?

Where do you plan to be in five years?

Can you explain to me how to calculate flow rates in different sized pipes?

Did I mention I was awesome?

The next likely statement will be the interviewer telling you to get your awesome butt out of their office. Congratulations! You have just been validated. A hiring manager just labeled you as awesome. You can put in on a resume. You do however have to be careful. If the interviewer happens to be the opposite sex, never tell them their butt is awesome too. This can lead to lawsuits. Enough said about that.

I have read many ads for jobs when I was unemployed and there is and there is one thing that is constantly mentioned. You must be motivated. Motivation is jumping out of bed and acting like your headed for Disney Land when you’re just going to the bathroom.

So how do you get motivated? Actually, this is hard, but I think I have a solution. Look at it this way; Motivation is a bit undefinable. Therefore, you don’t have to be motivated, you just have to look motivated in the interview. The best was to look motivated is espresso. That stuff will get extinct wooly mammoths moving. Four shots should do it. You will be motivated. So motivated in fact, you might build a model of the Eiffel Tower using the paperclips on the interviewer’s desk. But remember to stay focused. Don’t offer to wash the interviewer’s car more than once. Also, if you have to go to the restroom don’t get up and dance. In fact, if you can hold it, this just looks like more motivation.

A note about being yourself. Everyone talks about it, but no one really analyses it correctly. Frankly it’s bull crap. It only works if you’re already someone really cool. Those folks aren’t unemployed. I say get in that office and fake it, be the most awesome, motivated and smiley one in that office. They’ll have to hire you. If that’s not yourself; Who Cares?

There you have it, a guide to getting a job in tough times. I can’t say what kind of job that will be but you’ll have it. One last thing is you should be sincere. Once you can fake that you’ll be golden.

Okay it’s an old joke, but it really fit the situation, so don’t judge.

13 thoughts on “What Are Non-Motivated Frowning Idiots Supposed To Do?”