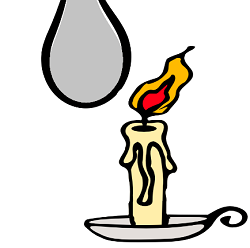 Somewhere in Egypt, in a yet undiscovered tomb is the hieroglyphic inscription, “Inka dar sorat naag huf” I haven’t the foggiest idea what this means. But I’m sure it’s there. There are all kinds of weird stuff in dark places. My laundry room for example. There is only one bulb to light the entire seventeen by twelve space. So, it’s pretty dark unless you’re standing right next to the washing machine. In the darkest corner, last week, my wife found a tarnished silver-plated tea set, a pound bag of flour, two bottles of dandelion wine, a letter stating my grandfather might still own alpacas, and a rock with a face painted on it. We were scared to dig any further. It might be where they dumped Jimmy Hoffa.

We have absolutely no idea where any of these treasures came from. My grandfather had passed before we even bought this house. Now this odd combination of stuff must be dealt with. We tossed the flour and rock, drunk the wine, and forgot about the rest. That wine was really good and really really potent.  But that’s beside the point.

The point is my wife decided to try to repurpose the space. All the accumulated stuff just ended up there because there wasn’t enough light to go through it. We needed more light there, and guess who got to install it. Now, I’ve never been afraid of house holds projects, but this one was a little different. You see there just wasn’t enough light for me to install a light there. I guess if there had been, I wouldn’t have to install it. But that aside I donned the old tool belt and went to Home Depot.

In the past I saw florescent fixtures for about fifteen dollars. I figured I’d get one of those and a couple of bulbs, easy peasy. Sadly, I found I am behind the times. You see the guy told me florescent bulbs are bad for the environment and the store was no longer carrying the fixtures. Well, no one could ever say I wanted to kill the planet so I asked what replaced them. The new thing is LED’s. Which as far as I can tell stands for Lighting Expense Doubled. Remember I said the fixtures were fifteen bucks? These LED ones were fifty. But, as the clerk cheerfully pointed out, they are energy efficient, and the bulbs are included.  Of course, there’s energy savings. I can only afford to put in one instead of two.

I purchased some wire, and was on my way, secure in the knowledge I had everything I needed. Nope. You see, LED fixtures assume you’re mounting them in a drop celling. I just planed to just attach it to the two-by-fours to the floor above with a couple of screws. The fixture had no holes for screws. At first, I didn’t know what to do. Then testosterone kicked in and a word etched itself on my brain in big red block letters; MODIFY. I’m a guy. I can drill a couple of holes in the bottom. No Sweat. The thing is, my drills are only for wood. I’ll had to run back to HD and get the right drills.

I was back on the job in less than an hour. Drilled my holes with only minor injuries, and was ready to hang the light. I measured the distance between the planks. Sadly it was not the sixteen-inch standard. Then I remembered an axiom my father taught me; Measure First You Idiot. Crap. I re-drilled the holes, stopped my bleeding finger with an adhesive bandage, and went outside for the screws.

Now I know I have screws in my garage. I would swear to it on a stack of bibles. Do you think I could find them on the day I needed them? No! I searched diligently for forty-five minutes and nothing. Back to HD for screws. In case you’re counting that’s three trips for one project.

Now I admit my errors in everything that happened up to this point. But I am blameless for this next fiasco. I accuse television for giving me wrong information. I don’t know the specific episode, or show, but I know I’ve seen guys install lighting holding it up with one hand and using the drill with the other. Do you want to know a secret? It can’t be done. Those suckers are heavy. I could barely get the thing above my head with two hands. The TV lied to us again. I took a break until my son got home. With his help I was able to lift it to the celling only to find out it wouldn’t fit where I wanted it. We swore at each other for the required amount of time, then found a nearby place it would fit. And with no added blood it was secured. Although I should mention that it’s hard to work an electric screwdriver with bandaged fingers.

Okay, the light is mounted and I have run the wire to the box with a few feet to spare. So now it’s time to turn off the electricity. As if it wasn’t gloomy enough where I was working. Now I have to make it pitch dark. I snagged my son again, and with penlight in hand, (no I didn’t have to go to Home Depot for that), I flipped the breaker. The lights went out and I removed the box plate. There were over five-hundred wires behind that plate. All curled up and mashed into a tiny space. It took me ten minutes just to detangle them and find out what was what. As I worked the penlight grew dimmer and my son who was holding it grew more annoyed. Eventually, I found what I thought were the right two wires. I connected them and went back to the breaker hoping beyond hope there would be no sparks.

The tension mounted as, with sweaty fingers, I flipped the switch. The light came on as expected. I knew I could do it. And it only took; Five and half hours, Four random trips, Three big mistakes, Two bleeding fingers, And a partridge in a pear tree.