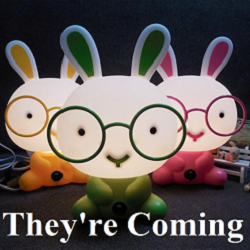 A lot of folks have asked, what a genius like Mr. Ohh! does when not making striking observations of the world. Well three of you have asked. Okay, better make that two, I probably shouldn’t include my wife in all this. Either way, it may interest you all to know I have spent the last few weeks within the scientific community, discussing issues of great importance. The biggest thing I learned is that anyone can say anything at random for scientists to study. I could walk into a forum and scream, “Milk Duds cause erectile-dysfunction in Galapagos tortoises,” and they have to hear me out, not for long mind you, but they do. I don’t even have to provide any proof to start the debate. But seriously who would discuss something like that without a government grant involved. Anyway, this is called a hypothesis, and it’s how all great scientific discoveries are started.

Now, if you have some data, no matter how stupid like; Say you observed six twelve-year-old kids stick spoons up their noses. After a couple of years, they all started dating. Then you could say, “Sticking a spoon your nose causes children to be more attractive to others. This is no longer a hypothesis; it is a theory. Wow isn’t this fascinating? No? In fact, I didn’t think so either.

You see I went there to astound and shake up the world community and I was laughed out of the room because I couldn’t tell the difference between a theory, hypothesis, observation, or vente mocha latte. But what I have to tell the world is important. It’s the biggest thing since the blue whale. Which, as you all know, is one of the biggest things ever. So, I am publishing my results here. What happens to it is up to you. Share it with everyone you know and prepare for the dire consequences.

My theory is that the evolution of man has been directed by the most intelligent creature ever to walk this earth. Not the dolphin or octopus. This creature is ten times more diabolical. I am of course referring to Sylvilagus Floridanus, more commonly known as the bunny rabbit. You doubt me. Ha, I say to the scoffers. Read on for the proof and be very afraid.

First once we understand that bunnies have been hiding in the shadows since the dinosaurs became extinct.  As smart as those creatures were, they were also being eaten by just about every carnivore out there. Being chewed up and swallowed by large predator can severely hamper scientific discovery. There you are, the test results are in, you scream, “Eureka I’ve discovered…”  CHOMP! Really slows down the progress.

Then a lucky miracle happened. A dumb little ape with an apposable thumb climbed out of the trees. The great rabbit council immediately went to work studying and observing this ape searching for advantages. As this ape and its kin wandered around, it showed no sign of being harmful to the rabbit society. Then the great Borreghr Bunny made a suggestion. If they could make these stupid creatures stop and plant crops, they would have a great food source. Using dream talking and other forms of mind control the rodents accomplished their goals. Bunnies from all over came and flourished in those fields forming tribes and built the beginnings of a great civilization. The first great rabbit dynasty was born.

Soon after the bunnies noticed that mice and rats were moving in on this new fertile bounty. What was to be done? Again, with the mind melds, and the early humans started domesticating cats. The smaller rodents were dispatched quickly and the bunnies reclaimed the land. Advantage bunnies.

Sadly, it was not all lettuce and carrots. Humans were developing a taste for the growing long-eared population. The second great council convened. It was decided a great risk must be undertaken to save the day. Several strong hares moved in close to wolf dens. When the wolves noticed them, the hares ran straight for the homes of the humans. A few simple tricks and wolves were domesticated into dogs. Having wolves by their sides the men hunted deer and larger game leaving the rabbits alone. The rabbit’s second dynasty was surly a time of great wealth, health, and bounty. Food was being grown by human slaves and most predators were being kept away. The bunnies rejoiced.

You can see where this is all going can’t you? Hawks started bothering the rabbits. They had the humans build cities that the hawks avoided. When land became more scarce, the rabbits gave people the design for boats. Not one rabbit fingernail was broken with the building of these crafts, yet cottontails are now seen the world over. Art and music were distributed when things were going so well and the silly humans had too much time on their hands.

I will admit the industrial revolution wasn’t one of the rabbit’s best idea. My research indicates that some gray rabbits were becoming more vulnerable than their brown cousins. The council decided, perhaps a bit of soot on the ground might just solve the problem. Well that little move got so out of hand and smoke soon covered the earth. I understand many a long-eared council member had to stand trial for that major faux pas, and the council leader was impeached. Rabbits have been sending mind messages ever since. The 4-H society has gotten the message really hard. They give out awards for how well kids can raise, treat, groom, and breed rabbits of all kinds.

I am not the first person in history to fully understand this. Beatrix Potter found out somehow. She told the world in her children’s books. I’m guessing adults wouldn’t listen so she tried to influence the young minds of the time. Luckily the benevolent masters let her alone because she treated them with respect and kept purchasing more and more land for the rabbits of Lancashire. Look it up. It’s right there in Wikipedia.

I think John Steinbeck knew something too. Look at the ongoing theme through his book Of Mice and Men. Simply put, that theme is; Rabbits should have a farm life with a comfortable massage every day and men who don’t fit in are eliminated. The text is right there in black and white. You just have to understand what you are seeing.

So, my dear people, what are we going to do about all this? I am willing to lead the charge but I can’t for two very good reasons. First, I have already been in front of the scientific community and blew it. I am a laughing stock. I could never go back there. Someone else must take up the standard and run with it. Only then will they come to me and I can show the world the full body of my research.

The second reason is far more complex. While I was away last week a family of fuzzy bunnies moved in, under my patio. I think I’m being watched. If I make too many waves I might just disappear like Jimmy Hoffa.

In fact, as a precaution, this spring I’m planting a nice garden with lots of lettuce.

Here you go, you nice fluffy bunny you. Have a nice yummy carrot.

7 thoughts on “Do I Get To Pet The Humans George?”