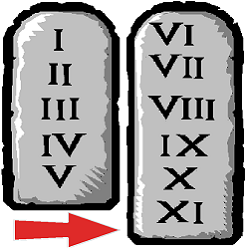 Hey everyone. I have some new neighbors, Trae and Coco. No, I am not kidding. Who gives their kids names like that? Better yet, who named their kids like that twenty years ago, and what mortgage agent gave them a home loan without laughing hysterically? But I digress. Anyway, I have new neighbors, and we get along with them quite well. Trae likes my jokes, has a seventy-two-inch TV, and shares his expensive fancy beers. What better way to get along with one’s new neighbors?

When they moved in, Coco was very pregnant, and one day she was having tea with my wife when I got home. I should have turned around on the spot, but I made Stupid Husband Mistake #36. I said, “Hi Ladies.” I should have known better than to alert them to my presence. At first, I was shunned from the room, then unfortunately was called back. It seems Coco was new to the state and wondered how she should pick a pediatrician for her new baby. My wife told her that I was the one who picked ours when my oldest was born so I was invited in for Girl Talk. YUCK!! After a few words of encouragement, I tried to leave, but the pregnant woman tossed a flyer at me and suggested I just pick a doctor. She trusted her new friends.

It scared me to death. What if I picked wrong? What if her kid ended up being treated for an earache by the foot doctor and came home with everything in the wrong place? Not wanting to seem stupid I looked at the pictures and specialties, but that didn’t help. I mean; Is an ugly neurosurgeon better or worse than a pretty orthopedist? It boggles the mind. I tried to eliminate some of them in simple ways, like checking which ones were accepting new patients and had offices close to our homes. This decisive move narrowed the field from twenty-four all the way down to twenty-four. No Help.

Eventually I was forced to admit that I tacked the pamphlet up on the wall and threw a dart at it, when I chose my pediatrician. I did admit it might not have been the best way to choose. Both ladies laughed and thanked me, then sent me from the room in disgrace. Later I found out they selected a cute youngish woman doctor who specialized in respiratory ailments. It was okay with me. Frankly I didn’t much care. My job was done. Au Contraire!

Several weeks went by and nature took its natural course. Coco came home with a beautiful baby boy named Winter. If that doesn’t get him beaten up in school, I’ll be amazed. Anyway, the new parents invited us over to celebrate, but that wasn’t all they wanted. You see, due to certain complications, the new mommy was unable to drive and she needed to get the baby to his first doctor visit. Trae had to go out of town in a few days, and my wife had to work, so I was elected, by a three to one margin, to take mom and baby to the clinic. My good deed for the day.

Before I go on, let me explain something. Coco is twenty-two. Mr. Ohh! is not, and hasn’t been for several years. When we got to the clinic with a baby in a carrier, our age differences earned us a lot of very funny looks. At first it was cool. I was Captain Fertile with a hot little chickee-boo by my side. I straightened up a walked with a bit of a strut, until we came to the first medical assistant. She loudly called out to the new mother, “Oh good. You brought your father with you.”

I was upset, and started to say, “Wait a minute, I’m not old enough to be her father. My son is… four… years… younger… than… Never mind.” I am old enough to be her father. I quietly sat down in one of the uncomfortable chairs and tried to disappear. A few moments later, her name was called and I picked up her 8-pound son in his forty-six-pound carrier, quickly realized that one hand was not enough to haul the load and tried again to pick it up with both hands and went in the office to meet Dr Muffy.

She was like the preppy queen of fashion complete with plaid wrap around skirt, poufy blouse, and high-heeled black pumps. She even had that high “valley girl” voice and “runway model” walk you see in movie satires. Her pores oozed more wholesomeness than Glinda, the good witch. I felt myself going into a diabetic coma just being in the same room with her.

Now, I have nothing against nice people. In fact, nice people are great, especially when let you go first in line at the grocery store. But doctors are supposed to be professional, with an air of extreme intelligence. You’d never see a TV doctor waltz in to a room singing with a voice that could only be heard by dogs.  Heck no! They enter solemnly and introduce themselves with a precise handshake, never a squeaky “Oooooooooooh isn’t he beautiful?” It made me think of a deranged kindergarten teacher. Not that I have anything against kindergarten teachers. It’s just that after years of hanging around five-year-olds they seem to start dropping IQ points like a one-armed man carrying fifty marbles, and who wants that in a doctor?

So, there I am trapped in a room with my neighbor, her son, and a doctor that looks and sounds like she should be at the makeup counter of a big department store. Yes, I am stereotyping. But remember, during my formative years stereotyping was okay. Just then it hit me, it’s a new century and I must give the lady a chance. It was either that or face my wife’s ire. The choice was obvious.

Well the examination proceeded and to my relief the doctor did appear to know what she was doing. In fact, the more she talked, it became obvious that she was quite good and highly intelligent. There remained one little thing, however, I couldn’t stop feeling that she should be dressed more conservatively. I know it’s wrong, but the preppy skirt still bothered me. I was terribly conflicted (how about that for a word?) until she was checking beneath his diaper and the cold air hit his privates. He let go with a stream that any beer drinking college student would be proud of. He not only soaked the skirt but also properly aimed it, so that anyone who didn’t see it happen would have thought that the preppy Dr. Muffy, had wet herself.

Coco became embarrassed and apologized, whereas I fell to the floor laughing and shouted, “Good boy!” I warned you that I wasn’t politically correct. Then an amazing thing happened. I looked up as Dr. Muffy looked down at her now ruined skirt and joined in my revelry. She even commented that the yellow tint somehow added to the ensemble. It was at that moment she earned my respect. She had a warped sense of humor and that’s something I understand. To top it all off, she never sent a bill for the cleaning or replacement of the skirt. I guess great decision-making doesn’t just happen, so I may have to replace my dart.

3 thoughts on “Thou Shalt Not Help Thy Neighbors”