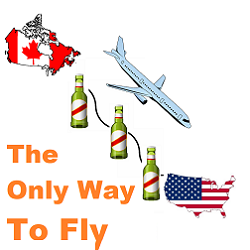 I haven’t shaved in two days and my hair is a mess. I have four beers in front of me, and you might wonder why, on this short flight between Canada and the USA, I would do that. The reason is actually very simple. Very odd, but simple. You see Canadian flight attendants on Canadian airlines, flying from Canada, don’t carry change for Canadian currency. Why? Probably because curling is more popular up north and they needed the coins to illegally weight the ice brooms, or pay off the refs. How should I know? The point is. she didn’t have it, and I was faced with a choice. Either, pay American cash, and get stuck with a pocket full of leftover Canadian money, or buy enough beer to cover the bill in hand. I chose the second option, and you’ll see why. Actually, the only challenge I’m feeling is how I’m going to finish all these before landing? No sweat, because beer goes well with nightmares.

It all started when a friend of mine, Dave, got in some trouble. He has a radio show outside Toronto and was using some of the jokes he found in my blog. I didn’t really care. In fact, I was enjoying the face that more people were laughing. The thing is, the station manager also happens to read my stuff. Obviously, these folks have a highly discerning taste and a good feel for great comedy. I mean, once you start reading Mr. Ohh! your world will be brighter and the universe will shower you with only the good things of life. Or not. But it makes me feel better, and frankly I care most about me.

My friend was called into the office for plagiarism. Not wanting me to sue the station, the manager told Dave to stop using my stuff. Dave told him that I had given him permission. I wish I hadn’t. If I had known I could sue the station… I mean Dave is broke, but the station probably has money to pay. Oh well. Anyway, the manager wanted something in writing, so Dave called me and since we hadn’t seen each other in a while I decided to hand deliver it, and have a visit.

Getting there was easy. Even the line at TSA was short and I popped right through. Customs in Canada smiled at me and stamped my passport with glee. I should have taken all this as a Dark Omen. I have done some traveling in the past and this never happens. I liken it to walking into a prison. Getting in is easy, getting out is hard, and what happens inside they should have laws against. Well, I was inside and still looking forward to seeing Dave, so my mind was distracted by positive thoughts. I really need to become more pessimistic. Oh, by the way, if your counting, beer one is gone.

I went to the station, and signed the papers, and started enjoying myself. The manager really enjoyed meeting me and we laughed for a while. He told me about a local comedy myth. “If you can get laughs in a Toronto Subway station you are the best.” I normally don’t perform out, so I laughed it off. He egged me on and so we went to a station, set a box in front of me, and tried an act.

I did Ok and actually made a few bucks until some idiot threw two cats into the box. They jumped out but left dander all over the bills. At the end of the set, I was smiling, and was going to buy dinner for the three of us, but decided to scratch instead. I am allergic to cats, very allergic. Now it happens that I was in front of a National Health poster when this started so my scratching and swelling was taken as performance art. I’m told I actually made more cash with that. Who knew writhing, swelling, and scratching were so popular?

They took me to a hospital, which actually had some plusses. First, I no longer had to pay for a hotel. I’m sure the bar would have been better in the hotel, but then again if I wanted anything in the hospital, I just pushed the nurse call button and they brought it. The ultimate in convenience.

Dave was allowed to hang out for a while because I was a foreigner. I was like a circus attraction. “You’ve heard about them, and maybe doubted their existence, but we have one right here. Yes Folks, Come see the American! Live and in the hospital.” And they came. doctors, nurses and aides, and all with the same question, “Do you folks actually breathe down there?” Yup, everybody wanted to hear my celebrity foreign lungs. So now I know. If the comedy, or performance art things don’t work out, I can spend the rest of my life, traveling the world, curling up to people with stethoscopes. It’s a rapidly expanding art-form Hic, Beer two is gone.

I will say I have spent more comfortable nights. The bed they put me in auto-adjusted for an unknown reason. So, every time I got comfortable, pssst-ssssst-sshhhhh the air in the bed changed and I was uncomfortable again. After fighting this for about three hours I gave up, and just lay still. That bed certainly showed me who was boss.

I got out of the hospital in time to make my flight home. Little did I know I was being sabotaged. You see the hospital gave me a thin metal bookmark about 3 by 12 cm. It has a tassel and a logo print of the hospital. I stuck it in my book and thought no more about it. Then I got to Canadian TSA. I put my metal objects in the bin and entered the metal detector. It went off. I forgot about the bookmark and insisted I had nothing else. Well, they took me aside and found the offending bookmark hidden in the book. I apologized saying I forgot about that, which I did. Then Kong came over. Kong rubbed it across his arm and it made a bloody scratch. He declared it a dangerous weapon and took me to The Small Room. Yes, folks I Mr. Ohh! was suspected of international terrorism for carrying a book. To say the least I missed my flight. Say bye, Beer three.

Authorities were called, including a defense attorney and an actual judge who practices international law. I admit I was impressed. After two hours, it was determined that my souvenir bookmark was indeed a bookmark, and finding a bookmark in a book is reasonably logical. Kong was upset but apologized and the Canadian government invited me to return soon. I understand that security has to be tight and frankly I spent most of the time laughing about it. You meet the most interesting people at TSA in airports.

After that everyone was so very nice. I got a free dinner out of the deal, and they made sure, I was on the next plane home with no additional charges.

Just like American Express; Incarceration and hospitalization have their advantages.