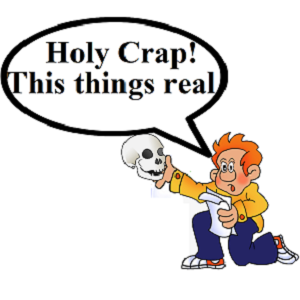 “Thou mad mustachio purple-hued maltworms!” Huh?? What the heck is that supposed to mean? This line is a direct quote from William Shakespeare, Henry IV: Part 1, and like so much of old Willy I don’t understand a word of it. I got out my handy-dandy dictionary and I looked up the words. First of all, the definition of maltworm is tippler. Well, that helped a lot, NOT!! I had to look that up. After several trips to the dictionary, I actually learned that this phrase is an insult. It means; “You crazy red-faced drinkers with big mustaches”. It loses a little in the translation. He could’ve just said, “You drunken dudes are nuts!” This is a quote I can get behind. The thing is Willy never wrote anything so clear.

Shakespeare would have been better to listen to some out the other great writers like Emilie Autumn in, The Asylum for Wayward Victorian Girls; “Some are born mad, some achieve madness, and some have madness thrust upon ’em.” Now, this is a quote that Mr. Ohh! can really get his head around. It’s older English, it’s quoted from classic English literature, and it talks about madness. Which, by the way is a subject that I comprehend very well. Sadly, this is all beside the point. Willy, are you hearing this?

The point is that Shakespeare is supposed to be the tip-top of classic literature and I don’t understand any of it. I have read some of his work, mostly because it was an assignment in college, but we always had to discuss what the subtle meanings were. That’s the thing. I’ve written a couple of books, and several plays for local theatres, and I would be insulted if before every performance there had to be an hour discussion, telling the viewers what I was trying to say. Hey folks! Here’s a clue, it’s in the play.

Of course, I feel the same way about ballet. The dance is beautiful. Why do they complicate it all by writing this eight-page story in the program? If you sit and read it, you’re missing the dances. If you don’t, you never understand what’s happening when a hundred guys in termite costumes dance in, and toss around the extra-large roll of toilet paper. Actually, if you haven’t seen this one, you should. It’s really pretty good, especially the movement when the prima-ballerina dances with the chainsaw, apparently attacking hornet’s nests. Boy, does she spin and move fast, but I don’t want to give too much away.

That’s the thing about what folks call The Classic Arts. Most of it is unintelligible. I’m not saying it’s bad. I don’t know if it’s bad. I would have to understand what the heck is going on to be able to know that. Also, there’s always debates with the classics. Take Willy for instance. Experts say there is too much work attributed to him. There just wasn’t enough time in his life to write all that stuff. So, since he owned the theatre perhaps everything that played there was said to be written by him. Or, it is believed much of his stuff was actually written by Francis Bacon. Of course, in the last four-hundred years, it is lost as to what was Shakespeare and what was Bacon. Some folks say they can tell the difference in style and taste. I know I can tell which is which; Shakespeare tastes like paper and Bacon is delicious, especially on a cheeseburger. Okay, that was an old joke but sometimes just like in cricket and baseball, you hit the easy ones hard. But seriously, I’m looking at classic works and being even more perplexed because I don’t know who I should be cursing at, Frank or Willy.

The reason I am bringing all this up is my children are in High School and College, and for some unknown reason Shakespeare is extremely important in those places. I know a bunch of people have made billions of jokes about having to learn Algebra, saying they’ll never use it again. The thing is, a lot of the new jobs do require algebra, and even more use the problem-solving skills it teaches. Nobody uses classic literature. Even actors who perform the stuff are handed the script before they go on.

Answer truthfully, have you ever been having dinner and the server comes to your table and asks, “Prithee, which repast woudst thou favor?” That has never happened. By the way, that’s Shakespeare talk for “Hey, what do you want?” There are thousands of college students who study old Willy right now, and wait tables, including my own son and they don’t talk like that. Do you honestly think they’re going to do it in the future? Nay Mi’ lords n’ ladies, yound would beest most queer. That’s Willy saying, “Folk’s that’s just nuts!!”

My daughter is studying Willy’s Hambone. The only thing I use ham bones for is to make soup. I thought it was a recipe book. I bet it’s a common mistake. In the story there’s this dude named Hamlet, a meaty role for and old bone, but what do I know. Now, he thinks about killing himself over his dead father, but instead kills his uncle and mom. As long as he keeps it in the family, I guess it’s alright with me. At least none of the big-name TV detectives show up to confront him saying he did anything wrong.

Hamlet’s got this girlfriend with sever social issues. He tells her to go to a nunnery, a place where they manufacture nuns. I guess she’s confused, she wanted to sell shoes or something, because instead of making nuns she decides to knock herself off. This is really dumb seeing as how she might have ended up in the office or as an administrative assistant to one of the managers. I guess this is why it’s called a tragedy. Ophelia, could have had a good job, with benefits, but she wanted to stay home and make soup with ham bones, so she kicked the bucket. Yup Tragedy.

My son is studying a different one of Willy’s tragedies, McBeth. I don’t know about you, but to me this sounds like a trollop you might pick up at McDonalds. “I’d like McNuggets, a McCafé, and a McBeth, to go please.” Then the counter person might say, “Sorry sir but McBeth is out for the evening. We still have McEmily, McAnn and McGurtrude in the back if you’d like.” Am I the only one who sees how this rolls off the tongue? Also, just when you look at the cover and think about fast ladies of the evening, you open the book and the first thing you see is a recipe. I don’t what they’re making but those three ladies are throwing some crazy stuff in that boiling cauldron.

Then there’s Romeo and Juliet. I wonder if Willy would like the Bronx remake, West Side Story. It’s actually Tony and Maria, and Maria doesn’t die. So, now Shakespeare suddenly becomes Gershwin. And yes, my kids have to study him in high school too.

Hey everyone, before you go I just need one more minute of your time. It may or not surprise you to know, but Mr. Ohh! has written ten Christmas songs and I am now ready to record them. However, I need your help. I’m trying to Crowd fund the production costs. If you want to help, go to Kickstarter.com and search Finally Some new Holiday Songs, follow this link https://www.kickstarter.com/projects/newholidaysongs/finally-some-new-holiday-songs-a-parody-christmas-album That will direct you to the right place. Thanks, a whole bunch and now we’ll get back the regularly scheduled laughter. Thanks all