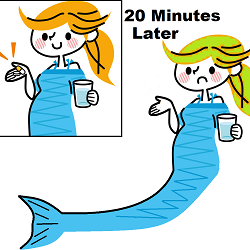 The medical community is in an uproar. Apparently, they feel they haven’t stuck enough needles in folks in a long time, so they want us all to get two shots of Covid vaccine. I know some folks believe in these shots, and some don’t. Well, I’m not here to change your mind at all. No matter how you feel. I don’t think great people like me, should be telling others what to do. That sounds too much like parenting and I already have three kids who whine and don’t listen to me. Why would I want six-billion more?

The truth is I don’t think folks in medicine get along very well. Think about it. You break your arm and wrap a towel around it to stem the bleeding. You go to the emergency room and tell the attendant what happened. You sit down and after a while a nurse comes to get you. The first thing you’re asked is why you’re there. You just told the attendant, and there’s a bloody towel wrapped around your arm, but you have to tell the story all over again. Don’t they communicate? Do they not have eyes to see the messy towel? It doesn’t matter, you have to tell the story again.

Then you get put in a room to rest. This is your fifteen minutes of fame. Folks come out of the woodwork to poke and prod you, draw blood, take you temperature, and get your vital signs. Why? I don’t know, but they tell me it’s vital. Lastly, everyone wants to know your story, again. When I was in the hospital, I had to tell my story fifty-seven times. The thing is, all of them typed it into the computer. You would think after all that input someone would take a look, and know you’re still bleeding. But No!

What I think is, they aren’t writing about you at all. Some are invariably writing books in the five minutes they spend with each patient. They ask how you’re feeling then write, “His lust for her was uncontrollable, yet his bleeding arm became an impediment to their connections. Thrusting her ample bosoms forward, she asked that inevitable question, every wounded warrior longs to hear, ‘Do you want some ice chips?’” That’s about all the time they have so they move to the next patient and continue.

Here’s another thing. What is it with ice chips in hospitals? Any place else, they offer you a drink or a light snack. It’s just polite etiquette. You walk in a hospital, and suddenly you can’t put anything in your mouth except ice chips and thermometers. You’d think with what you pay them, there would be a better menu. I understand why there are never any good, unhealthy, snacks in hospitals, sure, but why only ice. Not flavored ice, like a snow cone, no. just ice chips. I know they have to think wholesome but I’m sure they could better. I’ve written the AMA about this but as yet heard nothing in response. I’ll have to let you know.

Anyway, back to the communication issue. I don’t know whether those folks are creating novels, keeping a journal to be published later, or just filling out crosswords, but they keep writing and no one ever reads it. Someday some future race will unearth our computers, figure out how they work and wonder what we looked like.

“Look Bazorg, on this one day, a citizen named Mr. Ohh! broke twenty-three arms and went to the emergency room.”

“Fascinating, Gorluc, and look it appears many different specialists had to document each arm separately. They must have been an interesting race. Those two-armed creatures we see so many pictures of must have been their pets.”

The only reason I can figure for all this, is that they think you’re lying. They want to catch you in a lie so bad they ask you a lot of times to see if your story stays the same. I guess if it changes, they call your mother and tell her you’re a bad person and if she wants your arm fixed, she’ll have to do it herself. With all those calls and verification, I understand why you wait so long in emergency rooms.

The worst part of all this is the list of side effects they tell you before they do anything. Again, you’re sitting there in great pain, with your arm bleeding and the doctors want to have a conversation. “I could give this drug and it will probably make you feel completely better, but it may cause your skin to turn green, reverse your sex, stop all bowel-movements for a month, make you crave cookies at four-AM, and there’s a small chance it will cause death.” At that point with your arm hanging from a severed tendon, you’ll agree to anything. Who cares about the side effects? Just stop the pain!

This is exactly what happened when I was recently in the hospital, and as you may have guessed I took the drug. It did not cause my death, so that’s a good thing. However, some of those other side effects would have been cool to have happen. I’d love to walk around with green skin and mess with my neighbors, and having a legitimate reason to eat chocolate cookies at four-AM would be great. It would keep my wife from yelling at me when I do it anyway.

That’s another thing, I’ve finally gotten my Covid-19 vaccination shots, and I’m very disappointed. I read the vaccine will make you magnetic, and I got nothing. I even leaned up against the fridge and didn’t stick at all. I mean magnetically. That old juice stain is still tacky, but I’ve stuck to that long before the vaccine. I’ve also heard it will change your DNA. This would have been so cool. You get the shot and become Magnet Man, the new American super hero. Me and Spiderman could work together and I might even join The Avengers. Then there would be a movie and all that great stuff. But no! I’m still me and as great as I am I’m still not magnetic.

Another lie is that if you stand next to someone vaccinated it will disturb your menstrual cycle. Another big nope, and this just makes me sad. I got my shots and stuck very close to my wife in the hopes of disturbing her, and got nothing. I was hoping that I could mess up her cycle and avert the inevitable PMS. Well, she’s still fine and I’m still hiding once a month. Please don’t take offense to this, ladies. I’m just one weak nonmagnetic guy, and you’re so much tougher than me.

With all of this, I’m beginning to doubt the media. When I was growing up, my dad said, “If it’s the evening news it’s the truth.” Now everything you hear is either opinionated or misleading. It’s taking away my naïve belief in the medical industry. I guess I’ll have to refocus my time, get back to the greater truths, and continue my search for Bigfoot and The Yeti

7 thoughts on “It’s False Advertising! That’s What It Is!!”