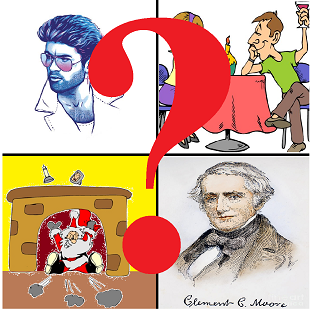 A bad song worth a couple hundred words

Last Christmas, I gave you, my heart. The very next day, you gave it away… Ohh boo hoo! You broke up a year ago and you’re still pining. No matter how you look at it, this is not my problem, yet it’s played all over the radio. Not just once in a while mind you, but over and over and over again. Also, this wasn’t bad news for just one person, ohh no. Taylor Swift whines about it, George Michael wails his depression, Kelly Clarkson moans for hours because of it, and the entire cast of Glee all broke up last Christmas! Man, was that a bad holiday for recording artists or what. Frankly, last Christmas my wife and I stayed together, and this year, to save me from tears, I’ll stay with my wife again. I admit it doesn’t make for a great song, but it works better for me.

Perhaps all the break-ups are due to gift giving. Just because those celebrities make tons of cash, they can still buy crappy gifts.  I mean getting a gift on Christmas, and having it be so bad that you trash the giver the very next day, has to be the giver’s fault. Right? Then again, the song says, “I gave you my heart”. Celebs do weird things, but Yecch! All wet, and squishy, and bloody, a heart is not what I’d call the perfect gift. Also, what does it say about the giver? I’d give that thing away as fast as possible myself, and break-up the very next day.

My story which may be related

This actually happened to me once. Although, it had very little to do with my gift giving abilities. It seems the girl I was dating had an extremely stuffy family, and I am (How should I say this?) a goofy idiot. I showed up to her family’s party from my own wearing a Santa hat, a reindeer sweater, lights around my neck, and three beers in. They all had just come from the ballet and were wearing suits, ties, and gowns, with shined shoes, and properly polished attitudes. I was not, to say the least, accepted into the clan. My lady friend was totally embarrassed, but rightly so as she could have warned me of the dress code. However, her mother and I had a great time. She was not part of the family business, and thought my antics were hilarious. You see I treated the whole thing as if it were a comedy roast. It was an odd situation, but that doesn’t mean I shouldn’t have a good time. Anyway, the very next day, the girl gave me away. Can’t say as I blame her, really.

The real issue to all this is, no matter how bad this song is, some of you will now find a copy and play to see if it’s as bad as I say it is. I am giving lip service to the worst song out there, and as a result the song may get more plays. Don’t do it! Trust me on this one. I am the highly intelligent Mr. Ohh! whom you’ve come to trust for all my great wisdom. If I say it’s bad you can take that to the bank. You don’t need your own silly opinions with me around. All right, you can have some views, just not about big stuff and especially not about this song. It’s a bad song. Enough said!!

How to disgrace traditional poetry

There are other holiday things which could use my wisdom as well. Yes, I’ve mentioned some of them in these posts, but the world is slow to respond. Take Clement Moore’s poem A Visit from St Nicholas as an example. Most folks don’t even know that’s the real title. They call it by the first line; Twas the night before Christmas. That’s kind of dumb. It would be like calling A Tale of Two Cities by the name It was the best of times. Imagine your high school English teacher saying that. Worse yet, imagine saying to her, “Hey, Mrs. Hixon, I just finished ‘It was the best of times’ last night. It was pretty good.” She’d give you an F for not doing the assignment and probably send a note home to your mother. But for some reason we get away with it for Twas the night before Christmas. I can’t figure it out, but I digress.

The real issue with calling this poem by the wrong title, is all the parodies and offshoots which have arisen over the years. Everybody and their brother have written a poem starting with that line, even I did. I’m just saying, all that phrase means is; It was Christmas Eve. That’s a terrible title. If I saw that title in a bookstore, I’d buy the book just to flush it down the toilet. Well maybe not, but I just might take a marker and write underneath that title, “SO What!?!” Clement was right in his titling and we silly moderners have usurped him. Could this be because he broke up with us last Christmas? No probably not, but still.

And a comparison between the two

All I’m saying is that words are important. George titled his bad song with Last Christmas, and it gives some information. Not much, and it’s bad information, but it is information. A stylized; It was Christmas eve graces so many poems, parodies, commercials, and jokes that it no longer has meaning. Nobody cares. Clement dealt in several languages, and highly intellectual stuff, heck he should have dated the girl I told you about instead of me. Of course, he died a hundred plus years before she was born, but her family would have liked him better. Anyway, he finally writes something for the masses, and even that took thirty-five years to be published. Old clement was not destined for fame. Then when that poem does reach acclaim we toss the title aside, and call it by the first line. Rather insulting if you ask me.

What would he say if he were here? I’m betting something like arrrrrggrrr, as he would be a zombie, because he died in 1844. Of course, there is the possibly he might be a vampire, those are undead as well. Hmmm. I’ve never known a vampire to be concerned with literary works, and in fact can’t think of a single one who has written a famous holiday poem either. I’ll have to check with Anne Rice about this. She’s the only one I’ve ever known who’s interviewed a vampire. Be all that as it may, I’m sure Clement wouldn’t be happy. End of story.

In conclusion: It’s All a mess

Then again, I could be all wrong. Maybe George had the right idea. The title of the song is Last Christmas, and the first words are Last Christmas… This is worth thinking about. Although the argument here is that more people have read and recorded, A Visit from St. Nicholas than the song could ever hope to muster. There’s also the money factor. George donated all his proceeds to charity, and Clement died before the poem was successful, so both got very little cash. Who knows? Perhaps they acted like idiots at their date’s holiday parties, just like I did.

Happy Holidays To All and to all a good night

How about a cup?

Hey everyone, before you go I just need one more minute of your time. Do you like my stuff? If you do, we should get together for coffee. That’s probably not possible so why not buy me a cup of coffee to show how you feel. It’s real easy just click below. Thanks a bunch for reading and listening