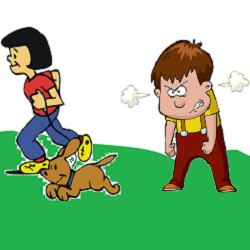 It started so simply

It all started out innocently enough. I thought I was doing some one a favor. You see the three of us were on a college visit. We were having a typical student lunch when our guide, a pretty coed named Amanda, stepped away from us for a minute to complain to a friend that fundraising for some spring coral-reef trip was going badly. When she came back, I made a casual statement that since there were so many good-looking men and women around the campus, they should have their own production show of The Bachelorette.

In truth I’ve never seen a single episode of that show. All I know is, it’s about one beautiful girl who has to pick a guy from a bunch of handsome hunks without getting stuck by the thorns on a rose, and it’s very popular. I also know that once the show is over you aren’t allowed to forget about it. It will be on the cover of magazines for the next twenty-five years. 92 Open mouth, insert foot, close mouth. 93 Open mouth, insert foot, close mouth. Sorry my wife walked by.

My Family Was Unhappy

Anyway, my wife and son were properly embarrassed, but Amanda asked me how they could make money from that? I stupidly ignored my people and put the immense Mr. Ohh! brain to work. They could televise it on the college TV station and publish the mens names, then create an app that allowed folks to vote for their favorite hunks at a buck a vote. When the girl picked the last guy, draw a lucky winner from the correct votes and they win and expensive prize. Amanda agreed it was a good idea. I felt a little testosterone rush when she smiled at me. I had to slap myself. Guy Rule 425 clearly states, “No getting excited over a young girl’s smile, when your wife is sitting next to you.” Well, we finished lunch, and all was right with the world, with only a stupidity factor of 5.

It wasn’t until a month later that my stupid really showed. 94 Open mouth, insert foot, close mouth. That was when phone rang and the caller ID said it was the college. I got my son on the line thinking they wanted to talk about his grades or test scores or something. Nope!! They wanted to talk to me about the TV show. It seems when they put my idea to the powers that be it was well received and not only was it to be broadcast through the university; a local station had picked it up. They wanted me to host it. I’ve done some TV sure but I didn’t know how to host that show. I’d never seen an episode. I discussed it with my loving family and they were all completely against me. My children wouldn’t speak to me, and my wife looked me in the eye and reminded me that she told me to shut up weeks ago and now I was stuck. I took what they said into consideration then agreed to do the show and drove two hours to the college.

I got to the college and the show progressed

I was introduced to Morgan. She was to be our bachelorette. Morgan was twenty and beautiful with auburn hair and blue-green eyes. The kind of girl that makes you think about launching ships and invading Troy, and I don’t even know where that is. I also met Lorraine. She was forty-six and scheduled to be my co-chaperone. Our job was to watch those bachelors around Morgan and make sure the TV camera people didn’t photograph anything that wasn’t ‘PG’ rated. In other words, I had to watch a beautiful young girl go on dates and hang out with handsome guys every day and night for a month. While I hung out with Lorraine. 95 Open mouth, insert foot, close mouth.

Before you folks get all over my case about body-shaming, beautiful older women, or men are pigs, and call some high-profile lawyer to sue my butt for ten million dollars, let me say that my butt doesn’t have any money. I have one of those vest pocket wallets so my right shoulder has all the cash. So there! Also, there’s a reason I haven’t described Lorraine. You see Lorraine has a puppy. I can hear the collective, “HUH??” from here. Let me explain.

Loraine and her puppy Milton

Just before all this started, Lorraine picked up a six-week-old chocolate lab puppy named Milton, and the way she talked on and on about him you’d think she gave birth to it herself. Milton was very energetic and did all sorts of fun things, and I heard about every one of them. Because of our chaperone job Lorraine could only see Milton for six hours a day, however she could talk about those six hours for twelve hours. Her husband worked from home so he sent Milton shots every five minutes. After a few days of this I was ready to take a shot at Milton.

I know there are dog lovers out there and frankly I like dogs too. The thing is I was stuck with a woman who talked of nothing else for hours and hours on end. I’m not even sure she heard my name before I heard about the antics of Milton. I get it, the little guy’s part of the family, but so are her husband and two daughters. I only caught pictures of the girls because they posed with Milton. After nine days I dared to beg her to talk of something else saying, “Lady look, It’s only a dog!”. 96 Open mouth, insert foot, close mouth 97 Open mouth, insert foot, close mouth. As you can guess that was a mistake.

You see what I didn’t know was that Milton, oops I mean Lorraine, was the Dean of the Communications Department. She was in charge of this whole thing. She oversaw the app development and all those students with cameras and microphones running around all the time. Most importantly, she was in charge of paying me. If there’s one thing, I’ve learned in my short life it’s that you never piss off the person writing the checks.